It’s true that there’s no shortage of authentic street food in Rosarito. You could feast for weeks off of the tacos, carnitas and mariscos. But when you need a break from Mexican food and you’re looking for a delicious meal with a different kind of latin flavor, it’s time to try El Gaucho Argentino.

This hole-in-the-wall restaurant, just off of the main drag in Rosarito, had been on my radar for a while. Trip Advisor has it ranked as one of the top restaurants in Rosarito. “Best steak sandwich ever!” “Authentic and delicious!” “Awesome empanadas and chimichurri!” I had no choice but to check it out myself.

We went on a Wednesday evening to try it out.  The owners, Gerardo and Flavia Marquiz, were there along with their two young daughters. The entire family speaks perfect English. We ordered our sandwiches and Gerardo got behind the grill to prepare the food as Flavia brought us bread with a delicious homemade chimichurri sauce.

We chatted with Gerardo and Flavia, and they told us about El Gaucho and their story. Gerardo is from Mexico and Flavia is from the U.S., but her father is from Argentina, which is where the recipes for the restaurant come from. Gerardo and Flavia had been living with their daughters in Los Angeles, but moved the family down to Rosarito a few years ago and started their business as a street cart on the main drag in town. Now, two years later, they’ve upgraded to a little restaurant space just down the street from where the cart used to be located. The décor is sweet and welcoming with high-top wooden tables and stools at the tables as well as at a counter. There’s seating for about 15 people inside and there are a few more tables and stool outside the storefront as well.  A chalkboard inside lists the items on the menu. The grill is located behind a counter near the front of the restaurant so patrons can still watch Gerardo cook up the savory meats. And most importantly, the food hasn’t lost its authentic street cart soul.

We ordered the lomito sandwich (steak) and the choripán sandwich (sausage). Both came topped with grilled onions and more of that delicious chimichurri sauce.  French fries served on the side. The sandwiches were juicy, flavorful and satisfying. The empanadas, as I hear from the many rave reviews on Trip Advisor, are supposed to be delicious as well. On Saturdays, El Gaucho returns to its street food roots by bringing out a grill onto the sidewalk in front of the store and having a barbeque. I can assure you, I’ll be back to check it out soon. 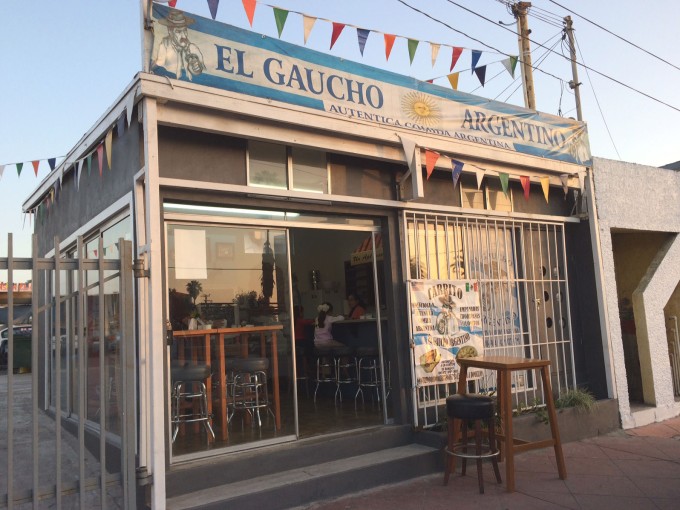